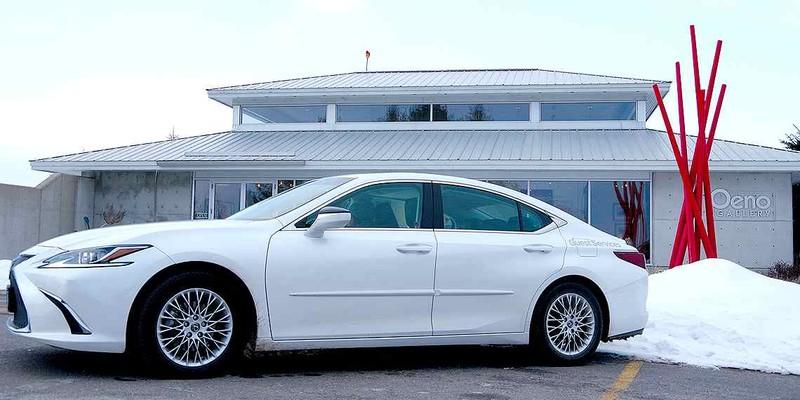 A Winter’s Tale. By Jeff and Tracey Keary

This is the second in our occasional series of Lexus car reviews written from the standpoint of ordinary person just driving the car, we are not motoring journalists and hence no reference to horse power, gearboxes or drive trains will be made.

The Lexus 350 ES, either executive saloon or elegant sedan depending on who you believe, is pitched in a very competitive market sector populated particularly with BMWs and Audis who manufacture very attractive vehicles. A traditional three box saloon like the 3 and 5 series BMW or Audi A4 or A5, the ES is invested with a flowing eye pleasing design that’s almost sporty. Sharing the family resemblance with the ‘cow catcher’ front grill, though this car is graced with grey slats which foster a less intimidating impression than the RXL reviewed last Fall. Pitched at business professionals and perhaps more mature drivers, the Lexus certainly turned a few heads parked in our driveway, and our neighbours probably thought we had won the lottery.

Keyless entry means the doors open when one pulls anyone of the four handles and they illuminate at night as one approaches. Push button start allows one to leave the ‘dongle’ in your pocket. Pressing the start button brings to life a visual display reminiscent of the beginning of the universe: mercifully it is short and silent.

Inside it’s fairly ‘plain Jane,’ but in a sophisticated and understated manner. Powered leather seats, heated and ventilated, move in every way possible and various degrees of lumbar support are obtainable: it took just moments to secure a comfortable driving position. The information centre is well placed and in our experience the screen’s visibility is never compromised by stray sun light. Helpfully, navigational prompts also appear in the instrument cluster directly in the driver’s line of vision. At dusk I was advised to turn on the headlights as it switched the display to the very cool night mode. Selected options for temperature, air conditioning, or volume controls etc. etc. also make a brief appearance on the screen.

It seemed like a criminal act to clamber into the immaculately prepared pristine pearlescent white vehicle in snow covered winter boots and muddy jeans…I felt like I should be better dressed…a suit and tie certainly wouldn’t be out of place. 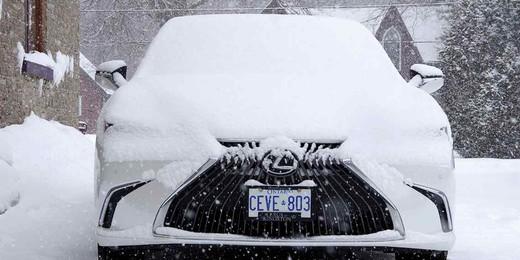 Running on ordinary gas this vehicle earned brownie points straightaway with my frugal nature, but as a sedan this is not the car for me, it’s a long way down for my tall frame and I’m not as flexible as I used to be! Once inside it’s the familiar story of tall people’s syndrome. Although there is actually plenty of head room for my 6 ft 4 ins, I’m staring at the sun visor which if deployed would further reduce visibility. Naturally it’s a fabulously sunny day, even if damn cold so I’m pleased I remembered my sunglasses.

The way back to The County from Kingston offers the opportunity for highway driving. Picking up speed quickly makes for easy access off the on ramp and into right hand lane. It may not throw you back in your seat, but who wants that, other than motoring journalists, who we must remember are not paying for the privilege, but the gear box has a sports mode for those who must accelerate faster.

A cocoon of silence envelopes the driving experience and I soon find myself exceeding the notional national unofficial speed limit of 119kph! A look down at the rev counter indicates astonishingly low revs, around 1500, which no doubt accounts for the tranquil progress. Leaving the 401 and joining highway 49, aka Grapevine’s ad hoc test track and The County’s worst road surface, it was pleasing to observe that this was engaged with a calm equilibrium and our fillings remain in place. Another challenger for that title: the decrepid Closson Road, which winter has further ravaged and is now akin to a war zone suitable only for use by farming equipment, or maybe hovercraft. This was accomplished reasonably well, though not at great speed, but still a significant improvement over our dear old Equinox. However to be fair, many of the pot holes and craters were filled with ice, effectively improving the quality of the road surface. But whatever the Lexus guys do with their suspension tuning and passenger cabin isolation, it certainly works.

The test drive took place during one of the worst snow storms in recent memory and driving in the general direction of Wellington was probably ill advised with the high winds whipping up white outs. An encounter with a snow plough coming from the other direction proved alarming, the car was drowned in a plume of snow and slush blown up by the gale and suddenly I couldn’t see a thing. To the rescue came the rain sensing wipers and all was clear again in a couple of sweeps. Other safety gizmos the car is equipped with are radar controlled adaptive cruise, lane departure alert, the usual plethora of air bags, and automatic high beams, which detect the brake lights of preceding vehicles, hence not blinding the driver in front. I had a concern that the mirrors were on the small side, but once adjusted they work well enough and are kitted out with blind spot monitoring.

As mentioned the audition took place in a snow storm, one of such ferocity that by the time I’d swept the snow off the car, it was time to go round again! The roads were well covered and only some recently ploughed, however never once did the Lexus lose its footing, despite being front wheel drive and never once did the traction control engage. Introducing the car to Fingerboard Hill was a test of faith that was rewarded by getting to the top in dreadful conditions, albeit slowly.

If you, like me, you place comfort, tranquility and fuel economy over outright performance, then this is a car well worth considering. Exiting the car propels the driver’s seat backwards to assist egress, so rear seat occupants might well be advised to exit in advance. However this feature is triggered only when the driver releases the seat belt, which is well thought out. A warning message also advised turning off the lights and previously another had warned me to turn on the lights as I started the car in brightly lit supermarket car park at night. It is surprising how often one sees people driving about without lights at night. When I first returned home having been listening to the radio along the way, I actually forgot to turn the engine off, and left the car idling. At those revs the engine is so quiet one can hardly hear it over ambient noise. By now I was running low on gas and the information centre helpfully asked me if I would like to be guided to the nearest gas station. This might seem like an indulgence but it could be pretty useful when in unfamiliar territory.

Criticisms, well same as the RXL, there is a shortage of spaces for glasses and sunglasses, though the cupboard between the front seats opens from either side which seems very clever and you can plug a phone in the power outlet without requiring the manual dexterity of a contortionist, unlike the Equinox. Thin on the ground too are spots for bottles of water, or purchases from the drive thru and the rear view camera gets covered in snow and rendered virtually useless very quickly in adverse weather conditions. Maybe it could be wired into the circuit that heats the rear window and the mirrors to keep it clear?

The Lexus 350 ES presents a serene driving experience soaking up imperfect road surfaces and tire noise with aplomb and is a delight to drive on long journeys. For normal people, it combines an abundance of power with every safety feature you can imagine, remarkable fuel economy, and also provides a comfortable ride for five adults and their luggage. The trunk is bigger than one would expect. Its looks are growing on me and my neighbours are envious. Yes, I’d go with Elegant Saloon. Time to take it back to Kingston!