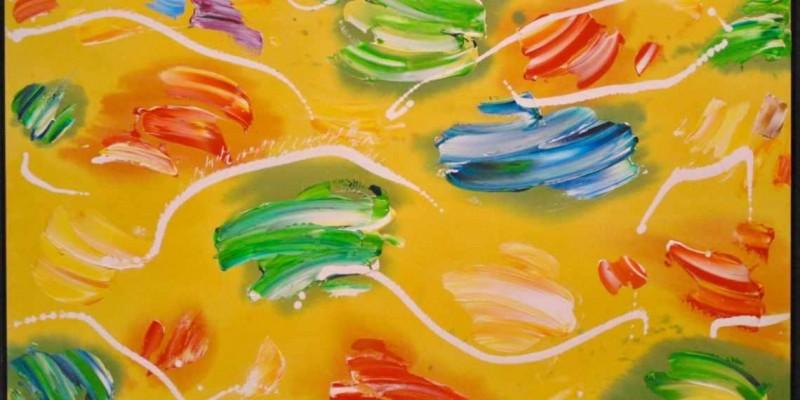 Following a successful birth in Main Street, Hatch Gallery recently relocated to larger premises at 8 Stanley Street Bloomfield, in order to have more space to display paintings and to host events. One of the first of these was a “performance” by Callen Schaub in which Callen took the risk of producing artworks in front of a live audience.

David grew up in the Toronto suburb of Scarborough and was a teenager during 1970s, which he affectionately remembers as a “vibrant time.” This was the era of the Yonge Street Mall, Mirvish Village, Kensington Market and of course Yorkville. “The city was hitting its stride like an awkward teenager shaking off the shackles of its childhood. Hippies were getting, well…hip.”

“Mod fashion was everywhere along with groovy music and amazing abstract art. For a kid from the suburbs... the city seemed to be exploding at the seams with life and unbridled enthusiasm. Anything seemed possible,” recalls David. At the weekend he did everything he could to get downtown to be a part of this happening place. “You could spend an entire day just wandering the city. Live music, strip joints, fashion, art, seedy arcades. The whole city pulsated.”

Eventually he would discover the art galleries around Yorkville and Mirvish Village that were home to the super hip Canadian abstractionists of the era. Many of those artists made the “scene” at Grossman’s Tavern and called Toronto their home.  The Art Gallery of Ontario too, always had something new and exciting happening. Like the music and fashion of the day…the abstract paintings
spoke to me. It was as if they represented the future and optimism.

Many years later when David and his wife Stacey started to earn a living, they re-discovered this almost forgotten era of their youth…buying back record albums of the 70s artists they had listened to as teens and by buying some of the art that had so fascinated them as kids in the big city.

As luck would have it four years ago, one of their art dealer friends, Ron Moore, a bit of a legend in the world of Canadian abstract art announced he was retiring. He had been a dealer in Hamilton and Toronto for almost fifty years and represented some very heavy hitters…artists like Riopelle, Molinari, Ronald and Bloore. Ron offered to show David how an art gallery was run and proceeded to introduce him to his stable of artists. “It was a golden opportunity to try my hand at something new and to learn from someone who really understood the industry.”

“And I knew it was something that I am extremely passionate about. How could it not be a pile of fun?”
“Three years on…I’m having a blast. I love working with artists. I love turning clients on to the work I represent.”

“When someone buys a painting…it’s such a wonderful thing. The buyer gets so excited. The artist is thrilled. And I feel like a matchmaker! It’s very cool.”

David is only too happy to share his enthusiasm for Canadian abstract painting with visitors. Check out hatchgallerypec.com 8 Stanley Street, Bloomfield.