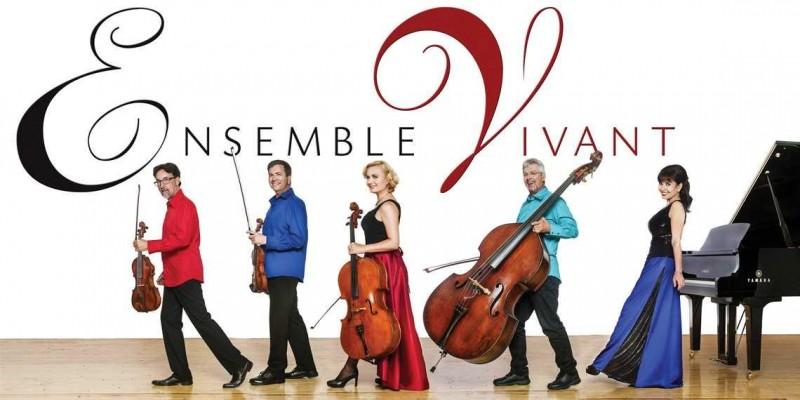 Music is the Key

Some of Canada’s most accomplished musicians are bringing high-caliber music to schools in interactive live performances. Organized under the banner of a charitable organization named after the Greek muse of music, their goal is to give children what many have never experienced before – live performances of the best in classical and jazz music. Art for art’s sake? Certainly. But, it goes much deeper than that. As concert pianist, and Euterpe’s founding artistic director, Catherine Wilson points out, “Music is the key,” it is an inimitable catalyst in bolstering empathy, cooperation, social cohesion, and self-esteem.

In classical Greek mythology, nine lesser goddesses known as the muses are the pagan patron saints of the most civilized aspects of human existence (everything from astronomy to dance); for her part, Euterpe is associated with lyric poetry and music. Discovering what makes music so special in the human equation is the work of McMaster Institute for Music and the Mind (MIMM) in Hamilton, Ontario. Among the ‘big questions’ it seeks to explore is ‘the importance of music, sound, and movement in human development, health, and society.’ The institute’s founding director, Laurel Trainor, a professor of psychology, neuroscience, and behaviour, says that, “We often think of music as just auditory; but it’s hard to play it or listen to it without moving our bodies.” Indeed, there seems to be an intrinsic connection between the auditory and movement-related regions of the brain. When we play (or hear) music, the motor areas of our brain are activated, even if we don’t move. And for humans, movement, like music, is often rhythmic – even in its most unconscious forms, like the beating of our heart or our walking gait. Synchronized movement to auditory rhythm is not widely seen in nature; it’s something that sets humans apart from most other species, including our closest genetic relations.

Trainor says that the relationship between music and movement produces profound social effects. When we listen to music in a group, we synchronize with other people in subtle ways, something that prompts us to subconsciously regard them differently. MIMM’s studies show that those who move together to music like each other more, trust each other more, and cooperate with each other more. Trainor notes that it’s probably no coincidence that music plays such an important role at weddings, parties, and funerals; it’s also a solidarity-builder in military training. In schools, it was once much more common for kindergarten teachers to play the piano and to sing: ‘leading their charges in coordinated singing helped keep things in order.’ And as Euterpe’s practitioners point out, more complex musical forms, be it Bach, Mozart, or jazz, “can benefit [people] on deeper levels because of the complexity of structure” in such music’s harmonic, melodic, and rhythmic bones. These days in schools, recorded music is far more common. The result often is that kids aren’t singing, even though involving them in music-making is a very important tool in social interaction. That’s where Euterpe comes in. 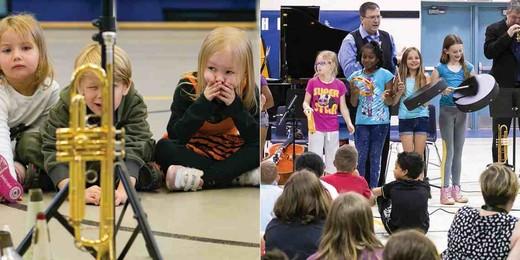 Since the spring of 2018, members of Euterpe’s flagship ensemble, the internationally-acclaimed Ensemble Vivant, have been performing in schools through the length and breadth of Durham Region – from Beaverton in the north to Oshawa in the south. They launched their school visits program in Durham, though Euterpe operates across the country, with a free concert at Oshawa’s historic Regent Theater in May. By year’s end, they had visited eight schools in the region, presenting two concerts per school, with audiences of typically 250 students, ranging from kindergarten to Grade 8. Nine more concerts are already confirmed for 2019. Of those hundreds and hundreds of school-kids, as many as 95% have never been to a live concert, and certainly not one featuring classical and jazz music. But almost all of them are eager to repeat the experience. The musicians of Ensemble Vivant (Catherine Wilson, piano; Corey Gemmell, violin; Norman Hathaway, viola; Sybil Shanahan, cello; Jim Vivian, bass; Kevin Turcotte, trumpet; & Mike Murley, sax) are determined to dispel the assertion that you have to be white and well-off to benefit from a musical education.

Euterpe’s free hour-long school concerts combine music and commentary (and a Q&A session), and they’re designed to get the kids involved. In some schools, the children paint or draw their free-association responses on paper. The rapt fascination and delight on their faces is unmistakable in Euterpe’s promotional video. Jayne Krattiger, the principal at one of the host sites, Hillsdale Public School in Oshawa, says that the visit got rave reviews from all ages. Before things even got underway, merely getting a close-up look at unfamiliar (and therefore exotic-looking) musical instruments elicited some looks of awe. And, how in the world, they wondered, did they get the baby grand piano through the door? “Informative, entertaining, and engaging” is how Krattiger describes the experience, as the children “participated in rhythmic patterns and learned about the complexity of the string instruments while listening to classical music.”

Euterpe has a follow-up program in place for schools with music teachers; and they’re hoping to find funding to send visiting choral directors to schools. Speaking of funding, Euterpe’s school visits in Durham Region are being supported by TelMax, a new player on the telecom block with ambitious plans to connect all of Oshawa with fiber optic cable. CEO Zsombor Burany says his company is intent on integrating into the community – both literally (in their fiber optic expansion) and figuratively (by engaging with and supporting activities in the community). For Burany, Euterpe is “a really good match.” Indeed, there is common cause between the community-driven visions of the company and its charitable partner: “We do it because we want to be good citizens, [to] engage the public, and bring value to the community.”

Zsombor Burany brings a European sensibility to the partnership, with an upbringing in which music was a way of life. But, why is live music so important? And, why is it so important that children be exposed to the best in classical and jazz music? Catherine Wilson did her doctorate in music and healing: “It’s well-documented that classical and jazz are important for the development of the young brain, yet most kids today are not exposed to these genres. Live, high-caliber performances create an intimate personal experience between the audience and the performers, that is quite distinct from electronic or recorded music. The ‘vibrational element’ inherent with high quality acoustic instruments beautifully played provides healing benefits – even for students with hearing impairments.  The kids are engaged; they exude joy and excitement; they express how the music makes them feel; and they ask, ‘When will you come back?’Often, they’re inspired to play an instrument themselves and to make music with others.  Euterpe plants musical seeds and awakens young minds to the joy of this music.” For her part, Laurel Trainor says that when people are asked why they listen to music, they often say, “When I’m feeling sad, music makes me feel better.” For Trainor, it’s a way to “regulate [our] emotions.” Its link to human physiology finds expression in MIMM’s study of music’s potential to help patients with Parkinson’s disease by priming their motor system and improving their ability to walk. (MIMM is also studying ways to improve hearing aids, which are currently better at making speech more intelligible than they are music.) Music can “nourish the soul,” as Norman Hathaway, who does double-duty as Euterpe’s president, puts it. Wilson adds that “Not everybody is going to be a concert performer, but… everybody has the right to be nurtured by music.” A musical visit by Euterpe to a Toronto hospital prompted this reaction: “[They] enchant and stir the listener to the deepest levels of their mind, body, and soul.” Whether we find inspiration in music, or catharsis, whenever we experience it with others it is an agent for social cohesion – and what could be more valuable at a time when society’s centrifugal forces too often drive us apart?

“O body swayed to music, O brightening glance, / How can we know the dancers from the dance?” (W.B. Yeats from “Among School Children,” 1928)

“The Muse of Music in the Classroom”