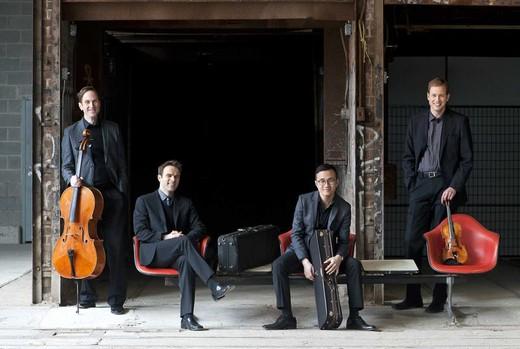 Researching this topic I came across a book entitled “The Four and the One” * which seemed an appropriate description of the change of directorial hands at the helm of this year’s festival. When one is replaced by four, it says a lot about the one. Stephane Lemelin is the one, to whom considerable credit must be given for making the festival what it is today – the four are the members of the New Orford String Quartet, to whom Stephane Lemelin confidently passes on the conductor’s baton. “Each member has a specific area of responsibility,” states Eric Nowlin, the quartet’s viola player and spokesperson, describing the transition “as a leap of faith” and something that to his knowledge “makes the festival unique.”

I ask what steps will be taken to reach a younger demographic. Eric responds, “This is an issue that is prominent among all classical music organizations. Everyone is trying to find ways to connect with younger listeners, and get them interested and involved. There are a couple of things that can help us reach a younger demographic. The first is to have more of an online presence - younger people now get all of their information online, and so that is where we have to focus our efforts in reaching out. Thankfully, we have committed board members who are on this, and are expanding our reach with Facebook, Instagram, the PECCMF website, and putting videos online. A second way to reach younger audiences is to host satellite "events" that present chamber music in a more casual atmosphere, with some discussion of the works, and lots of interaction with the audience. It also helps to have a theme for the event, one that ties the music in with art, or food, or wine!”

Do you see the challenge of streaming limiting the appeal of live music? “I view streaming as a way for people who are not able to attend a concert to be able to hear the music in real time without having to physically be present. However, I still feel that if people are able to go to a concert, they would definitely choose to attend, rather than watch it on their computer or phone. There is something about the communal experience of listening to live music in an audience that simply cannot be duplicated with streaming. The energy and emotions of the performers, the rapport of the performers with the audience, the atmosphere of the performance space - these are all aspects of live music that continue to bring people to concerts. I feel that as recordings, videos, and streaming become more common, people will actually cherish the benefits of attending live music even more, as technology will never be able to duplicate the feelings and experiences of attending a concert.”

Surely it is this very reason, we humans invented music, the communal experience of music was obviously seen as fundamental to our development.

In this fast moving world we have created for ourselves of declining attention spans, sound bites and Facebook delivered dopamine hits, it becomes a real challenge to sustain one’s focus and just concentrate exclusively on a musical experience with a clear and calm mind. String Quartets have a fearsome reputation which is in some respects deserved as they usually represent the composer’s most concentrated musical statement, the synthesis life’s experience, distilled like spirits. To be able to play the violin, viola or cello at the supreme level of performance required to actually bring those marks on paper to life, requires a degree of study and achievement verging on genius. Musicianship of this exemplary standard does not occur in our backyard too often.

I hope you are planning to attend one or more of the concerts, may I recommend taking someone with you, preferably someone not normally likely to attend. Sometimes we just need a push or some a little extra persuasion to enter down an unfamiliar path. There could be no better way of supporting this year’s festival than making a personal effort to expand its audience. If we want the festival to continue and even to grow, we must lend it our support. See you there!

*Four and the One: In Praise of String Quartets by David Rounds.