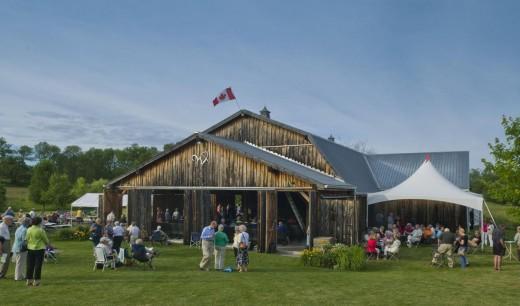 Artistic Director Brian Finley describes it as rustically sophisticated, yet the purpose-built space is so much more. Known fondly to patrons, friends and locals as The Barn, the unique concert space with seating for 400—with its superb acoustics—has seen myriad world-class musicians and performers grace the stage over its illustrious 18-year history.

Nestled among the gently-rolling hills of Northumberland County, the familiar iconic timber-framed structure is home to Westben’s summer festival of programming. Running from early June to early August, the eclectic schedule caters to all musical tastes and moods from full symphony orchestras, comedy sketches, fully-staged operas, solo performances, chamber music and much, much more.

Westben Arts Festival Theatre, a not-for-profit organization began its 19th year with a new vision and a new perspective and is now known as the Westben Centre for Connection and Creativity through Music—or simply Westben to friends, past, present and new. As Westben re-imagines its future as a Centre, its focus will be on promoting a year-round convergence of people, ideas and activities through music. “Our goal is to bring people together through music and that has always been important to Westben,” said Donna Bennett, Marketing Director.

Colours of Westben is the theme for this year’s summer season which ranges from mezzo-soprano Wallis Giunta to Canadian folk icon Sarah Harmer to Andy Forgie and Big Black Smoke. Or why not join the Montreal Jubilation Gospel Choir, John McDermott or the Hannaford Street Silver Band Tentet.

Of its comprehensive offerings, Westben have brought back “Unique Experiences” with a series called “Dare to Pair: Blending Grapes, Blending Voices”. This unique event will be held over six consecutive Saturdays with the aim of enhancing afternoon concerts with a dash of something special. Nationally-respected wine, beer and Scotch experts will lead interactive tastings, paired with delicious, locally-sourced food supplied by local-area celebrity chefs, all connected in story to the artists and their programs. Sommeliers, chefs, musicians and visitors come together for an afternoon to create unique musical stories Westben-style, seamlessly weaving the three elements of food, drink and music into a carefully-crafted afternoon of innovative delights.

The Dare to Pair series begins on June 30 with Bach and His World with Canada’s premiere Baroque orchestra, Tafelmusik Baroque Orchestra. Patrons can explore the wonderful world of Johann Sebastian Bach through music, video projections and narration by Blair Williams (of Shaw Festival fame). Born in 1685, a representation of the German composer’s timeless instrumental compositions will include the Third Brandenburg Concerto, Sinfonias from BWV 249a and excerpts from the Goldberg Variations.

With “Tafelmusik” translating to “table music”, the delicious pre-show lunch will be prepared by Chef Tina Moorey from On the Side Gourmet Food. Diving into the cellar for the best wines to accompany Bach will be sommelier Christopher Waters who is editor and co-founder of VINES Magazine. A pre-concert chat will commence after lunch led by Westben’s Artistic and Managing Director Brian Finley in a segment entitled “From Campbellford to Versailles”.

The July 7 event brings a concert version of Don Giovanni in an operatic masterpiece composed by Wolfgang Amadeus Mozart based on a libretto by Lorenzo Da Ponte. The two-hour long concert will be performed in Italian with music director Andrea Grant on piano. Giovanni is played by Alexander Dobson with Joel Allison as Leporello and Matthew Li as Masetto/Comendatore.

A pre-concert chat with Barb Hobart and Brian Finley will discuss the relationship of Don Giovanni to its creators. And for those who can’t get enough Don, join Alexander Dobson and members of the cast after the performance for a wonderful supper at Elmhirst’s Resort in Keene on Rice Lake in Dine with the Don. Brian Hanna from Huff Estates Winery will lead the wine tasting by introducing wines fit for the Don.

The third Saturday in the Dare to Pair series brings Moods and Modes on July 14. Founded in 1971 by artistic director John Washburn, the Vancouver Chamber Choir is one of Canada’s premiere choral ensembles and is deemed a Canadian national treasure. This special appearance will include a cappella choral music of J.S. Bach, Bernstein, Dvorak and Dowland as well as Canadians John Beckwith, Eleanor Daley, Stephen Chatman and more.

Sommelier Mark Taylor, BC Chapter Vice-President of the Canadian Association of Professional Sommeliers will preside over pre-show British Columbian wine pairings in perfect harmony with the 20 voices of the Vancouver Chamber Choir. Lunch will come courtesy of Chef Ron Czenar of I Am Custom Catering.

For pipe lovers, July 21 brings a Taste O’ Scotland with Westben co-founder and soprano Donna Bennett, tenor Colin Ainsworth with Brian Finley on piano. Enjoy a bevy of Scottish tunes from Down in the Glen to Loch Lomond to Flow Gently Sweet Afton.

Naturally, Scotch tastings will be the order of the afternoon with local Scotch expert Gord Reid on hand who will gladly share and describe a few of his favourite drams. Lunch by Chef Ravi Anandappa of Antonia’s Bistro will follow. The pre-concert chat with Barb Hobart will give diners an opportunity to meet the founders of Cambellford, the Campbell Brothers. Prior to the concert, get ready for some pipe bursting as pipe major Jamie York and the Port Hope and District Pipe Band perform in the meadow.

July 28 brings the dazzling Danel String Quartet who team up with Canadian superstar pianist and composer, Marc-André Hamelin. Performances will include the Piano Quintet in G Minor, Opus 57 by Dmitri Shostakovich and more.

The pre-show wine tasting will explore the French Connection as French wines (chosen by a LCBO expert) are perfectly paired with decadent dark Belgian chocolate from Harden & Huyse Chocolates. A pre-concert chat with Barb Hobart and Brian Finley will talk about the life and music of Shostakovich.

It is expected the Westben Steinway concert grand piano will get a good workout as the Saturday series concludes on August 4 with pianist extraordinaire Michael Kaeshammer. John Graham, owner and founder of Church-Key Brewing Company will present a selection of sliders and beer tastings from his award-winning stock. After the show, the Westben Jazz Fringe Festival presents Jazz Mains and Jazz Jam at the Clock Tower Cultural Centre in Campbellford.

Westben welcomes all to discover an unforgettable afternoon at The Barn this summer. Come mingle for the day, stay for the weekend; you will be among friends. For Westben’s comprehensive summer line-up, please visit westben.ca.

Westben Centre for Connection and Creativity through Music